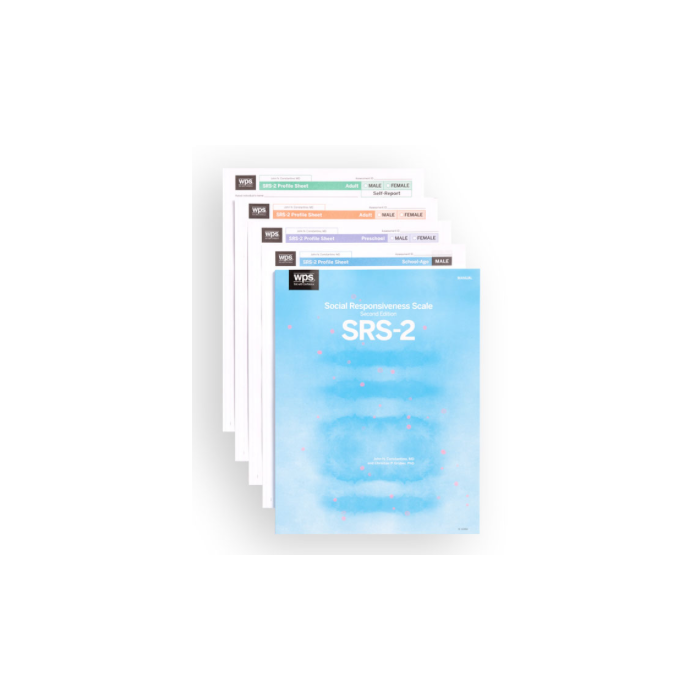 by John N. Constantino, MD
Norms
Provided separately for each form; based on sample of 1,906 individuals (4,709 ratings); nationally representative in regard to gender, ethnicity, education, and geographic region; separated by rater type as well as age and gender of individual rated
Scores
Total Score; Scores for 5 Treatment Subscales; Scores for 2 DSM-5 Compatible Subscales
Format
Parent and/or teacher rating scale for ages 2.5 through 18 years
ADMIN TIME
15-20 minutes
Ages
2 years, 6 months through adulthood
Benefit
Identifies the presence and severity of social impairment within the autism spectrum and differentiates it from that which occurs in other disorders
Publish Date
2012
Qualifications
Level C required.

The second edition of this highly regarded autism assessment offers the convenience of a screener and the power of a diagnostic tool. Completed in just 15 to 20 minutes, the SRS-2 identifies social impairment associated with autism spectrum disorders (ASDs) and quantifies its severity. It’s sensitive enough to detect even subtle symptoms, yet specific enough to differentiate clinical groups, both within the autism spectrum and between ASD and other disorders. With its expanded age range, the SRS-2 can monitor symptoms throughout the life span.

The SRS-2 offers four forms, each with 65 items, and each for a specific age group:

While some autism tests require trained professionals to code behaviors observed in clinical settings, the SRS-2 asks teachers, parents, and others to rate symptoms that they’ve noticed —at home, in the classroom, or elsewhere- over time. Raters evaluate symptoms using a quantitative scale representing a range of severity.

This approach—multiple perspectives on behavior observed in natural settings and rated on a graduated response scale—uncovers a wide range of symptoms, including relatively subtle ones. The SRS-2 often reveals aspects of social functioning missed in a clinical context with its “yes-or-no” response format. This is important because even mild social impairment can adversely affect children and adults. Numerous independent studies demonstrate that the SRS-2 is unmatched in its ability to measure the severity of social impairment in the mildest and most common forms of ASD—including Social Communication Disorder, a new diagnosis in DSM-5.

Use the SRS-2 Treatment Subscales to Guide Intervention

In addition to a Total score reflecting the severity of social deficits in the autism spectrum, the SRS-2 generates scores for five Treatment subscales:

Although not used for screening or diagnosis, subscale scores help in the design and evaluation of treatment programs.

In addition to the Treatment subscales described above, the SRS-2 offers two new DSM-5–compatible subscales:

The SRS-2 has gained support from several independent, peer-reviewed studies conducted internationally in schools and clinics involving diverse populations and diagnostic groups. These studies show that the SRS-2 discriminates both within the autism spectrum and between ASD and other disorders—making the test highly useful for differential diagnosis. When the SRS-2 reveals social deficits associated with autism, it tells you exactly where these symptoms fall on the spectrum. And when the test indicates that autism is not present, it often points to other conditions in which social impairment plays a role.

SRely on the SRS-2 in Educational, Clinical, and Research Settings

The brevity and sensitivity of the SRS-2 make it useful for a variety of assessment needs in clinical research and educational settings. Its quantitative nature and wide age range make it ideal for measuring response to intervention over time. It is crucial in all of these settings to isolate autism spectrum disorders from other psychiatric conditions, and the SRS-2 is well suited to this purpose. It clearly distinguishes the social impairment characteristic of ASD from that seen in ADHD, anxiety, and other diagnoses.

The SRS-2 can now be administered and scored through the WPS® Online Evaluation System™, offering an efficient and convenient way to use this powerful assessment. Online testing allows clinicians to:

Spanish forms include item translations only. U.S. normative scores are used and the manual is available in English only.

The SRS-2 is the Social Responsiveness Scale, Second Edition, authored by John N. Constantino, MD, and published by WPS.

What is the SRS-2 used for?

The SRS-2 identifies the presence and severity of social impairment within the autism spectrum and differentiates it from that which occurs in other disorders.

What does the SRS-2 measure?

The SRS-2 measures severity of social impairment in the mildest, and most common, forms of ASD—including Social Communication Disorder.

Who can administer the SRS-2?

Who can purchase the SRS-2?

Anyone qualified to administer the SRS-2 or representing a group that is qualified, such as a purchaser for an organization or a school district.

What is the training for the product?

Training is available for groups of 10 or more. Please contact one of our Assessment Consultants by calling 1-800-648-8857 and requesting product training for your group.

How do I score the product?

What items do I need to purchase?

You may purchase the SRS-2 Kit that includes AutoScore Forms and manual.

What is the validity/reliability of the product?

Perhaps the greatest strength of the SRS-2 is broad evidence of test validity that it provides from additional data and results from independent sources. A review of sources report SRS-2 scores for a wide range of diagnostic groups that display a clear separation of mean scores for different groups, including the most severely ASD-affected compared to more moderately affected; both most severely affected and more moderately affected compared to those showing some ASD symptomatology in groups with other relatively severe non-ASD diagnoses; and all diagnostic groups compared to typically developing groups.

Is a certain group contained in the standardization or clinical sample?

Norms are provided separately for each form; based on a sample of 1,906 individuals (4,709 ratings); nationally representative in regard to gender, ethnicity, education, and geographic region; separated by rater type as well as age and gender of individual rated.

What year was it published?

Is there a digital version?

Yes, the SRS-2 is available online at https://platform.wpspublish.com/account/login..