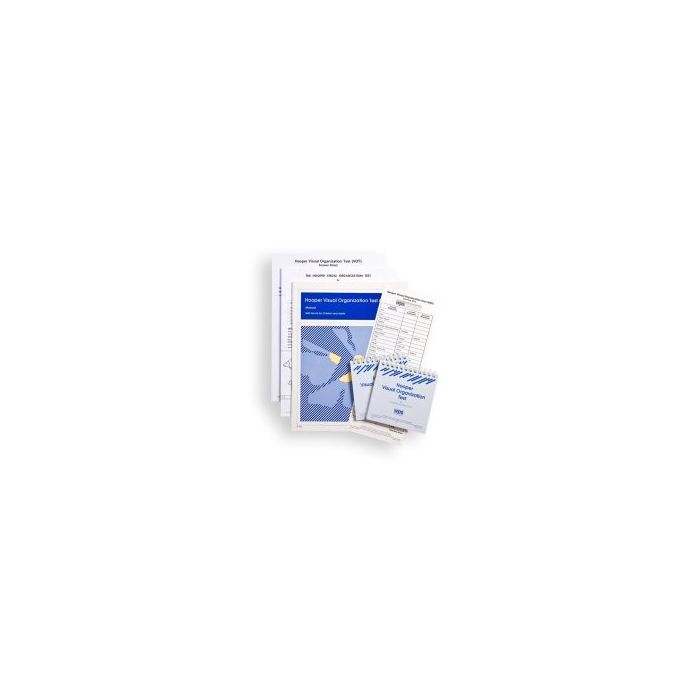 The Hooper Visual Organization Test (VOT) allows you to quickly detect neurological impairment, even in clients who might otherwise be difficult to assess. Widely used with adults and adolescents, the VOT can be administered to children as well. Norms based on a sample of more than 500 children from 5 to 13 years of age are provided with the Manual.

This brief screening test measures the individual’s ability to organize visual stimuli—a task that is particularly sensitive to neurological impairment. It taps both general and specific cognitive functions, including:

The test consists of 30 line drawings, each showing a common object—such as an apple or a ball—that has been cut into several pieces. The pieces are scattered on the page like parts of a puzzle. The client’s task is to tell you what the object would be if the pieces were put back together correctly.

The VOT minimizes situational factors—such as low motivation or inattention on the client’s part—that can lead to diagnostic error. It is relatively independent of distractibility or verbal ability and doesn’t require a motor response. The test is nonthreatening, and it usually engages even the most reluctant clients. Those who can’t come up with the correct answers can still respond to the items in some way. This allows you to successfully test individuals who might refuse to cooperate on an intellectual task where failure is more obvious.

The VOT is brief, simple, and straightforward. It can be administered by a paraprofessional, working under your supervision, in less than 15 minutes.

Unlike many neurological tests, the VOT does not measure speed of response, which can be affected by depression, anxiety, motivation, biochemical shifts, and, of course, normal aging. Therefore, the VOT has no time limits. This makes it a more specific measure of visual integration that is diagnostically useful with a wide variety of clients, including the elderly.